“Our study shows that there is a strong association between the presence of certification and improved working and living conditions in and around certified FMUs in the Congo basin,” said Paolo Cerutti, a senior scientist with the Center for International Forestry Research (CIFOR).

“Positive social outcomes occurred in certified FMUs more than in non-certified FMUs because companies were required to adhere to an implementation schedule covering multiple standard-setting criteria checked by a third party in regular evaluations.”

Improvements also occurred “because companies were required to maintain a permanent open channel of communication with local populations, and because companies better managed their reputational risk,” added Guillaume Lescuyer, one of the co-authors of the report and a researcher with CIFOR and CIRAD (Center for International Agricultural Research for Development).

Forest certification, which ensures timber is produced according to specific voluntary, third-party-audited standards, has been promoted as a means to tackle deforestation and forest degradation since the early 1990s.

As of May 2012, the global area of certified forest was 394 million hectares, with 92 percent of certified forests in the Northern Hemisphere and only 2 percent certified in the tropics, according to the joint “Forest Products Annual Market Review 2011-2012,” produced by the U.N. Economic Commission for Europe (UNECE) and the U.N. Food and Agriculture Organization (FAO).

Major international certification schemes include the Forest Stewardship Council (FSC) and the Programme for the Endorsement of Forest Certification (PEFC), which endorses several national schemes, such as the Malaysian Timber Certification System, the American Tree Farm System (ATFS), the Canadian Standards Association and Canada’s Sustainable Forestry Initiative (SFI). Earlier this year, the China Forest Certification Scheme was also endorsed by the PEFC. Indonesia also has its own scheme, the Indonesian Ecolabelling Institute (LEI-Lembaga Ekolabel Indonesia). 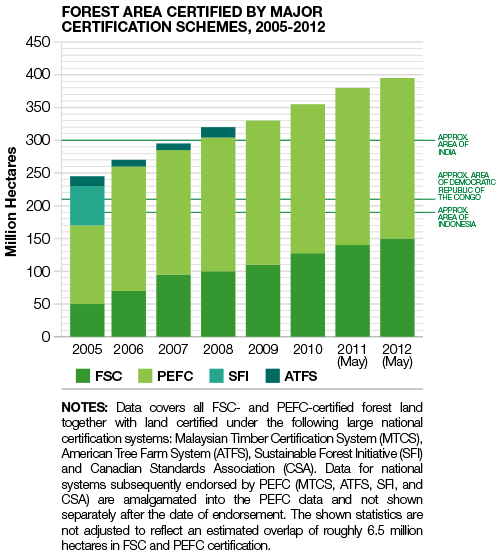 The most prominent scheme for the certification of responsible forest management in the tropics is the FSC, which checks companies and FMUs to ensure they are adhering to pre-established principles, criteria and indicators.

Despite support from scholars, environmental and social groups, governments and the private sector, the FSC standard’s social impact, which should result in improved relations between logging companies and local populations while contributing to local development, remains under-researched, especially in the Congo basin region, researchers say.

The CIFOR research, which was funded in part by the World Wide Fund for Nature, aimed to assess the social impact of FSC-certified and non-certified FMU in Cameroon, Gabon and the Republic of Congo, compare the outcomes between the two groups and determine whether differences in outcomes can be ascribed to the adoption and implementation of FSC certification.

The Congo basin was selected for the study because as of 2013, it had about 5.3 million hectares of certified natural tropical forest — the largest certified tropical area in the world, according to the FSC, representing about 1.35 percent of all certified forests.

Researchers undertook a review of mechanisms adopted by logging companies in 18 certified and non-certified FMUs to assess the living and working conditions of logging company employees and their families.

They also measured the effectiveness and legitimacy of the institutions regulating the relationships between logging companies and neighboring communities, and the rights to and customary uses of forests enjoyed by local people.

“We found that open dialogue between the local population and the company leads to improved employee satisfaction and that benefit-sharing mechanisms set up by companies improve the redistribution of funds to local communities,” Cerutti said.

Lescuyer added: “We also found that the presence of an FMU, certified or not, wasn’t associated with significant change in local agriculture, hunting and non-timber forest products collection for commercial purposes, although these practices are forbidden by forest regulations.”

Measured positive changes don’t yet mean positive long-term impacts on the livelihoods for everyone living in and around certified FMUs, Cerutti cautioned.

“However, measured social variables did seem to indicate that there exists a clear boundary between certified and non-certified timber, and that progress toward sustainable forest management has been driven more by certification than by current laws,” he said.

The researchers found that improvements at times required the correction of absent or weak law enforcement. Sometimes improvements meant that companies with certified FMUs had to assume the role of an “absent state” to avoid conflicting situations that would harm their certified status or their reputation.

As a result, the positive social impacts achieved by certification risk a continuation of the historic role of logging companies operating as a “state within the state,” a practice that should be abandoned, Cerutti said.

For further information on the topics discussed in this article, please contact Paolo Cerutti at p.cerutti@cgiar.org

This work forms part of the CGIAR Research Program on Forests, Trees and Agroforestry and is supported by the World Wide Fund for Nature.